Just in ;Gory accident caused by remarkable “Mansa” song’s airplay in a vehicle due to absent-mindedness; 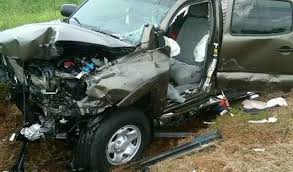 Just in ;Gory accident caused by remarkable “Mansa” song’s airplay in a vehicle due to absent-mindedness;

The remarkable Mansa song was released in June 2020 by the legendary Musician and numerous award winner “Six stones” impacted with tremendously smashing lyrical concepts coupled worth by sensational love impression characterised with the exceptionally vast dedications, faithfulness, and the relevance of Love in relationship

According to report reaching the media is that, the influential Six Stones-Mansa song’s airplay by a driver in a vehicle has caused a gory accident with regards to absent-mindedness by the driver and the passengers triggering from the jubilations of the driver who had then won worth 10000ghcedis from the Ghana National lottery with the due “Saturday’s Nationals”and in joyful celebration with the remarkable Mansa” song in the vehicle eventually caused the absent-mindedness by the driver and the passengers which accounted for a gory accident on the Western-North Samreboi road near the Saint Robert’s lodge in Western Region of Ghana according to an eye witness account. Fortunately there was no involved casualties recorded from the accident.
Download the tremendous Mansa song below

Sethoo Gh – No pain no gain