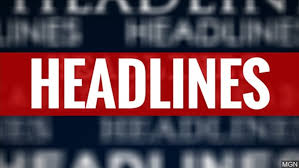 *These are the demands of the ‘Western Togoland’ separatist group

*Surrender and stay away from Western Togoland within 24-hours – Ghana Police, military warned

*Lawyers to picket at EC Headquaters over voter roll anomalies

*‘Western Togoland’ take over doesn’t call for a curfew – DCE

*’Work together with communities to tackle child protection issues’ – NCCE

*We have not abandoned ‘E Blocks’- GETFund replies NDC

*How Chelsea lost Tariq Lamptey to Brighton for only £3m

*Partey, Lamptey and other African players to watch this weekend

*Patience Nyarko is not my friend – Joe Mettle

*Mark Okraku Mantey praises Sarkodie after he gave him 500 pounds

*Nautyca teams up with Fancy Gadam on ‘Jeje’

*Coronavirus: Age and climate seen as behind Africa’s low cases

*Africa is pushing for permanent UN Security Council seat but how feasible is the agenda?

*Down but not out, Haftar still looms over Libya peace process

*We cannot be this corrupt – Sierra Leone president

SOURCE: GHANAWEB(VISIT THERE TO READ MORE ON THE STORIES ABOVE)